WHAT IS AN UNFAIR DISMISSAL? 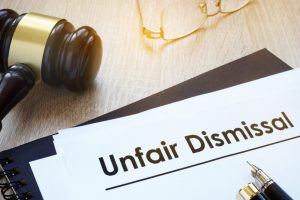 WHAT’S THE DIFFERENCE BETWEEN A HARSH, UNREASONABLE AND AN UNJUST DISMISSAL?

These concepts of harsh, unreasonable and unjust dismissals overlap.  But it is generally agreed that when the employee was dismissed for misconduct but that the employee did not commit the misconduct at all, the dismissal is unjust.

WHAT CAN AN EMPLOYEE DO WHEN THEY FEEL THEY HAVE BEEN UNFAIRLY DISMISSED?

An employee can file an application with the Fair Work Commission for unfair dismissal, alleging the facts that show why or how the dismissal was harsh, unreasonable or unjust.

WHAT REMEDIES CAN AN EMPLOYEE SEEK FOR THE UNFAIR DISMISSAL?

If the employee is found to have been unfairly dismissed from employment, the FWC may order the reinstatement of the employee or order the payment of damages for lost income or both.

WHEN WILL THE FWC ORDER THE REINSTATEMENT OF THE DISMISSED EMPLOYEE?

WHAT IS ONE EFFECT OF REINSTATEMENT THAT SHOULD BENEFIT AN UNFAIRLY DISMISSED EMPLOYEE?

Under s.391(2)(a), the FWC is tasked to determine if in ordering the reinstatement of the unfairly dismissed employee, the FWC ought also to determine continuity of employment and continuous service. This is a distinct determination from reinstatement, as an unfairly dismissed employee may be ordered reinstated without an order for continuity of employment.

A teacher had been employed for 15 months to conduct training. There were a few instances when the teacher was late for his training lectures because at one time, he had to stop and procure a tool he needed for teaching the class, at another, the students were late and so he had to wait for the students to arrive.

During one of his training lectures, the teacher wanted to emphasise the fact that herbicides affect living creatures including people differently and he told the story of an event involving a local and prominent farmer whom he also mentioned by name. The teacher told how 20 years before, the farmer sprayed herbicide in a paddock next to which the teacher and some of his co-workers were working. One of his co-workers experienced nausea while another experienced nosebleed. The teacher mentioned that he had then spoken to the local farmer and informed him of the effects of the herbicide on his co-workers. The local farmer said that he was going to spray in another paddock. The teacher mentioned the local farmer by name to show the students that even an experienced and prominent farmer can make mistakes like that and so the students must pay heed.

The teacher was terminated for misconduct, particularly, that the employer had lost trust and confidence regarding the incident with the local farmer, regarding concerns about the teacher’s tardiness and regarding an email sent by the teacher using their work email, to their previous employer which was a breach of the respondent’s email policy.  The teacher was given 4 weeks’ pay in lieu of notice and was dismissed.

THE FINDING OF THE FAIR WORK COMMISSION

The Fair Work Commission found that there was no valid reason for dismissal. The mentioning of the local farmer was not done in any derogatory or insulting manner but was done matter-of-factly.  The teacher apologised to the farmer and to the class for having mentioned the farmer by name. It was also clear that the teacher was confused as to whether there was any policy regarding giving the name of a local farmer in any of the lectures the teacher was supposed to give.

As for being late three times, the teacher provided good justification for the tardiness. And as for the personal email being sent through the work email, the teacher had already apologised for the behaviour and has not committed any similar behaviour.

The FWC found that there was misconduct on the part of the teacher which why his lost income was not restored 100%, but all the circumstances, when weighed together, does not amount to any misconduct serious enough to warrant a dismissal. Also, in the remote farming community, there were not as many employment opportunities for the teacher. He had found casual employment as a truck driver and farm manager after he was terminated from his employment but the salary he earned was significantly less than what he would have earned while employed as a teacher.

The FWC found the teacher to have been unfairly dismissed and ordered reinstatement with continuity of service and partial restoration of pay. The restoration was of 24 weeks’ or ordinary rate of pay less any income earned.