A married couple were franchisees of a carpet and flooring store. One staff member who assisted them in the day-to-day administrative and clerical tasks observed her boss showing signs of intoxication whilst at work. He was confused, forgetful, had slurred speech, and was unable to walk properly. The staff member became concerned when despite his obvious intoxication, he got behind the wheel of a branded delivery truck to perform a measure and quote. The staff member alerted the Area Manager of the carpet and flooring store about her concern. The head office alerted the police who then apprehended the boss while on the road. Her boss lost his driving license because his blood alcohol level was then 0.11%. 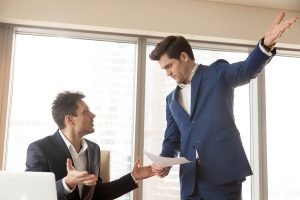 In July 2017, her boss left the office to go to the bank to withdraw money to pay the wages, but he again showed signs of intoxication. The staff member informed the head office that her boss was again drunk while on the work premises and it made her feel uncomfortable and unsafe. When her boss came back from the bank, he passed out and slept on the sofa in the kitchenette. The staff member took a picture of her boss on her mobile phone and sent it to the head office. The area manager came over to the store to inform them that the franchise will be revoked.

Two days later, the boss called the staff member to his office after her shift. He asked her if he had spoken to the carpet layer and if she had informed him that the store was closing. He had often observed the staff member speaking to the carpet layer while they were on their breaks. She denied it. Despite her denials, she was immediately dismissed.

The employee handbook which the executive assistant signed provided that if employees believed that the officers of the business were involved in wrongdoing, they were to report the concerns to the management and directors of the business and treat the matter with complete confidence. The handbook also provided that if the whistle-blowing was motivated by a malicious reason, the employee would be subject to disciplinary action including termination.
The question was whether the staff member was summarily dismissed and if the dismissal was based on reasonable grounds.

Have you been dismissed from work because you reported your supervisor or manager for wrongdoing? Do you feel that you are a victim of an adverse action by your employer? If you wish to speak with an employment lawyer and clarify your work concerns, the Adverse Action Lawyers from MKI Legal are knowledgeable and experienced in this regard. They can help. Call them today.